Itʻs September and the showdown is on!

Support ‘Ao‘ao O Nā Loko I‘a O Maui at the Third Annual World’s Best OCEAN Cocktail Showdown at Sheraton Ka`anapali. All you have to do is select our charity when purchasing tickets for this awesome event and $15 of each ticket sold will go to our non-profit.

We are teaming up with celebrity Chef Will Chen from freshBOX in Mānoa, O‘ahu and Ocean Vodkaʻs nationwide recipe finalist, Christina Schurr, as they create an exquisite dish complimented with an Ocean Vodka Pineapple Plum Spritzer.

During the event, vote for our cocktail and if we win, Christina Schurrʻs cocktail recipe will be named World’s Best OCEAN Cocktail and it will be featured on the beverage menus at Sheraton Maui Resort & Spa for one year. The best part of this win is that a portion of the proceeds from the sale of our Pineapple Plum Spritzer will be donated to our non-profit and within one year, we could earn thousands of dollars!

So go to www.oceanvodka.com, purchase your tickets and select ‘Ao‘ao O Nā Loko I‘a O Maui as your charity of choice. Itʻs as easy as that! Weʻll see you at the Third Annual World’s Best OCEAN Cocktail Showdown on Saturday, September 24th from 6:00 to 9:00 p.m. at the Sheraton Ka`anapali. Cheers! 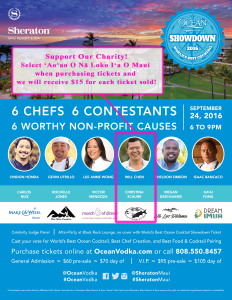 Voyage to the Northwestern Hawaiian Islands

Posted On 19th October 2005 ~ Comments Off on Maui News Article – October 2005
Case made for Fishpond By MELISSA TANJI, Staff Writer KIHEI U.S. Rep. Ed Case made good Sunday morning on a promise to return to Ko’ie’ie

Aloha `Aina Curriculum Workshop to be Offered on Maui

Posted On 26th January 2010 ~ Comments Off on Aloha `Aina Curriculum Workshop to be Offered on Maui
Attention Educators of Grades 3 - 6 Educators who are looking for creative ways to inspire Maui’s youth to excel in science, math, social studies